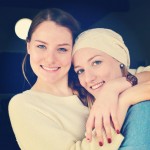 one of my new years resolutions was not to spend as much money on new make-up until I used up all the stuff I alreay have. So I conviced my sister Sophie from sophiesaddictions to start this project with me. At first she was not happy at all. She is addicted to beauty products so hard – as one can read in her blog. She only writes in german, so I´m sorry for all of you english-onlys. By the way, this picture of us two was taken by our aunt this christmas. However I had to help her not to cheat, so we had to set up some rules there.

So let´s go! First thing I did, was to clear out all the stuff I actually don´t want to use. Wowzer, that was quite a lot. But what shoul I do with it? I sent it to my sister. Makes her a bit happier during ten pan period. And she was, well it was some really great stuff! A lot of nude coloured nail polishes – some of them I actually never used – because I had a phase I thought I wuld use more nude nail polish…#wrong But actually those nail polishes are fantastic. I love Catrice nail polish

a lot! They are long lasting. And I know they are made in the same factory as the Chanel LE VERNIS nail polishes

. I actually like this one a lot. But as I have settled with my Helena Rubinstein Lash Queen Feline Extravaganza

and actually never use another one. I´m pretty lame sometimes. To it I am pretty blessed with my long lashes I have no need for special star-super-volume-mega-xxl-mascaras. So I felt my sister would enjoy it more.

I also gave her some eyeshadow sticks I tryed a month ago. I was searching for a more practical way to transport my eyeshadow as I am at my mans apartment a lot. But those did not nail it a lot. I have real exact requirements to eye shadow as I stick wth a natural look a lot. So I thought, she could at least review those!

So in the end I noticed I made it harder, but my sister had the same thoughts and sent me two eye shadow pallettes from make up academy. I´ll review them, if you wish so! 🙂

Status now is, that I emptied my Catrice Concealer in 001 Porcelain

– I hopes this is faster, as my concealer-stock is low! I´ll keep you updatet!

I linked all the products in this blogpost! 🙂

Previous Post: « Lush Haul – And how to display it
Next Post: Notes about oats – why they are good for you »